Genetic testing and potential harm: DTC or trust me I’m a doctor?

June 12, 2011
Recently at a couple of conferences (European Human Genetics conference and Consumer Genetics Conf) there have been various speakers questioning DTC genetics and calling for all health related personal genetics to be delivered through medical practitioners. I argued in the past that unregulated tests delivered through practitioners actually have the potential for more harm, not less. By coincidence last week some discrepancies in a DTC and a via MD test were pointed out to me – and they seem topical.
Breast feeding has many benefits one of which appears to be increased IQ scores – however not all studies agree, some indicating that results may be confounded by maternal intelligence (see Wikipedia). Sometimes inconsistencies in associating an action with an outcome can be resolved by looking at genetic variation (which tends to increase the error bars when not accounted for).
So in 2007 some headlines were made when a study was published by Caspi’s group (PNAS, open access) reporting that there is an increase in IQ but only in infants who were not GG for the FADS2 rs174575 SNP. It seemed like a good study, 2 cohorts whose location could not have been farther apart and nearly 3,000 children tested. The numbers begin to get much smaller though when they are dissected as only approx 8% were homozygous GG: 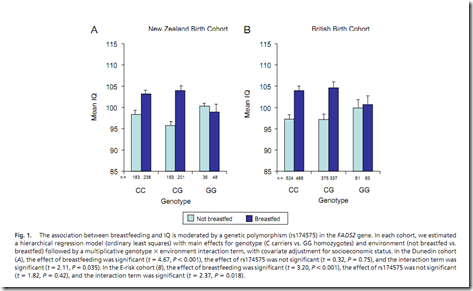 Interesting results – but just one study and there were some doubts expressed at the time (e.g. “they have a measure of maternal IQ but don't directly include it in the published multiple regression suggests that they tried it, but didn't like the results”)
These are preliminary results but a genetic test is was being offered to medical practitioners to enable “informed decisions” to be made (they don’t cite the study but it must be Caspi). They say:

Genetic testing performed by Existence Genetics enables parents to have access to this extremely useful information about their newborn. Although it may be ideal for most mothers to breastfeed, many are in situations that make the decision not so simple. For example, some women take medications that prevent them from breastfeeding, and others experience pain, poor milk production, and other difficulties.
If the baby doesn’t have this gene then breastfeeding appears to have no effect upon IQ.

Empowered by this groundbreaking research, Existence Genetics now provides women, pediatricians, wet nurses, and lactation consultants with exclusive genetic testing services that will allow them to make a more informed decision about breastfeeding.
Infants who have a specific version of the FADS2 gene will have an increase of approximately 7 IQ points, whereas infants without the variant won’t experience any IQ boost from breastfeeding.

Clearly the only influence that this result could have would be to make it easier for mothers not to breastfeed if there is no IQ benefit. Mothers of FADS2 GG babies will be told that breastfeeding will not increase IQ, there is no difference.
Rule No.1: do not base a genetic test on one study, even if it does look compelling. Break this rule at your peril.
Heres why:
Steer CD, Davey Smith G, Emmett PM, Hibbeln JR, Golding J (2010) FADS2 Polymorphisms Modify the Effect of Breastfeeding on Child IQ. PLoS ONE 5(7): e11570.

In a larger study Steer et al attempted replication in 5,394 children. They were not able to reproduce the results, in fact they reported that breastfed GG children performed better by 5.8 IQ points. GG children actually showed the greatest difference. 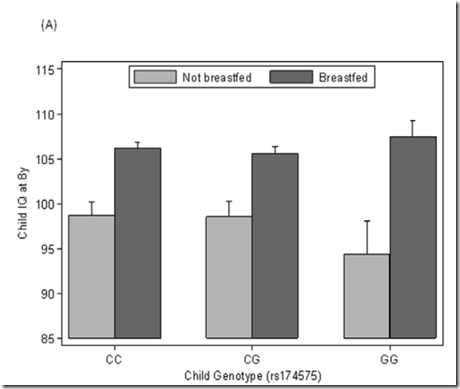 They also were unable to repeat the Caspi study – unadjusted data showed a benefit if breastfeeding across all genotypes although they also say that when adjusted for sex, SES, paternal and maternal education, and birth weight the significance disappeared – they support the hypothesis that the breastfeeding/IQ association “reﬂects variation in parental cognitive ability” – in any case there was no FADS2 GG effect.

Based on the follow-up studies there is no support for any personalised advice based on the FADS2 gene – it cannot be used as a reason not to breastfeed and the largest study actually showed increased benefits for IQ in the group that would be advised that not breastfeeding makes no difference
This same doubtful information is also delivered by 23andme: just one study and no mention of the two larger studies. It is though announced as a “preliminary research report”.

I am disappointed that 23andme have not caught the other 2 papers – do they not have an army of researchers keeping up to date? It’s an enormously emotive subject and thus very important, it suggests that they need to improve their literature update methods and I hope they will – try using the “alert me when this article is cited” feature common to almost all journals.
This is does not particularly look good for either of the companies, but there is a big difference – one is delivered by the healthcare practitioner as “useful information” to help you decide to not breastfeed, the other is presented as results of a study. Neither are justified but I would say that the potential for a harmful impact is increased in one of the situations rather than the other. Which has the potential for more harm? Even if you are of the opinion that both are equally harmful, it certainly does not support the claims that because DTC could be harmful it should be banned and all delivered through medical practitioners because that would protect the patient. My view is that DTC or MD is not the problem – transparency is.
I suppose FADS2 is an appropriate name at least
Caspi A, Williams B, Kim-Cohen J, Craig IW, Milne BJ, Poulton R, Schalkwyk LC, Taylor A, Werts H, & Moffitt TE (2007). Moderation of breastfeeding effects on the IQ by genetic variation in fatty acid metabolism. Proceedings of the National Academy of Sciences of the United States of America, 104 (47), 18860-5 PMID: 17984066

Popular posts from this blog

February 25, 2010
Celiac disease is a digestive disease that damages the small intestine and interferes with absorption of nutrients from food. People who have celiac disease cannot tolerate gluten, a protein in wheat, rye, and barley. Gluten is found mainly in foods but may also be found in everyday products such as medicines, vitamins, and lip balms. When people with celiac disease eat foods or use products containing gluten, their immune system responds by damaging or destroying villi—the tiny, fingerlike protrusions lining the small intestine. Villi normally allow nutrients from food to be absorbed through the walls of the small intestine into the bloodstream. Without healthy villi, a person becomes malnourished, no matter how much food one eats. Celiac disease is both a disease of malabsorption—meaning nutrients are not absorbed properly—and an abnormal immune reaction to gluten. Celiac disease is also known as celiac sprue, nontropical sprue, and gluten-sensitive enteropathy. Celiac disease is gen
10 comments
Read more

The Great Health Data Deficit: Are Environmental causes for Disease a Mirage?

December 16, 2010
Ever since I was a child the message has been eat your greens (we got caned at primary school if we didn’t), you need to exercise, carrots will make you see in the dark, an apple a day keeps the doctor away. It continues today with the “5 a day”, all the healthy food pyramids, anti-junk foods, and so on. Yes the environment can be dangerous, it can kill us. There are some indisputable examples, a bullet in the head for example, or getting hit by a car is an environmental impact that almost always results in injury and death. There are others on which we more or less agree, like smoking is harmful (evidence is very strong, although it has never actually been proven, who knows, it could be the regular movement of hand to mouth that causes all the damage, we need to do the proper controlled trial…) For the rest we have always sort of somehow known that eating badly can cause disease – it seemed so obvious, and all the little research studies just confirmed what we knew and lead to the
3 comments
Read more

The Eurogene project began in January 2008 with funding from the EU under the eTEN program - the aim is to establish the infrastructure, logisitics etc to make personal genetics easily accessible to practitioners.

In this blog I'll be writing about issues that affect Eurogene which can be anything from genetic screening to lifestyle and nutrition, informatics (interpretation and clinical decision making software is a very strong point of the consortium), regulations and progress of the the project itself.